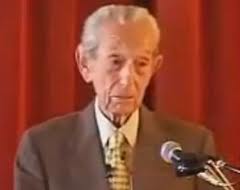 Lately, more attention has been given to a deceiver named Harold Camping.  He is the President of Family Radio that plays very nice Christian music in this area.  I love the music, but it comes at the price of being taught heresy in his Open Forum radio call in show.  Recently, I received this email question and here is my brief response.  I do hope that it will warn any of you that may come in contact with Family Radio.
"Hi PW,


Have you ever heard of Howard Camp? I believe he does Family Radio Ministry from Oakland, CA. I was just wondering if he is considered “reliable” in Biblical knowledge.

Response:  Yes, his name is Howard Camping and he is a deceiver. He is fairly popular on radio and now TV and is totally steering people in many wrong doctrines. Among these wrong doctrines are:


1. He incorrectly predicted that the Lord would come in 1994, now gives the date May 21, 2011 as the rapture or end of the world – I’m not sure which.
2. He is a hyper, hyper, hyper Calvinist which believes only the chosen can be saved AND even if you believe on Christ and ask the Lord to save you, He may not. He says you should just say over and over and over “God be merciful to me a sinner” and hope it works. (very bad salvation doctrine)
3. Most recently he preaches that every church is bad and all Christians must Come Out of the churches. No church is good. Only organizations like Family Radio are good, so send your tithes to them.
4. He doesn’t believe Jesus died in his human lifetime for sin, but rather before the world was ever made, God crucified him in heaven.....so, the death on the cross was only a demonstration of what He had done earlier.
This guy is bad news and he is deceiving thousands who are weary of organized religion (church)
Pastor Tobe Witmer"
Posted by Tobe Witmer at 10:28 AM