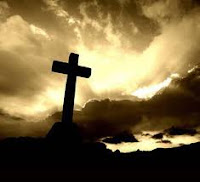 We remember on this holy day that our Lord Jesus willingly carried the guilt of our original and life-sin to the cross.  Though He was the Just One, He suffered for the unjust.  Though He never committed even one of your angry deeds, selfish motives, secret lusts - He lovingly accepted the verdict of God's wrath for them all.

With grateful hearts we remember this day and the nobility of Jesus Christ sacrificing His royalty, deserved pride, innocence, reputation, painfulness, etc. to win your soul for eternity.  There has never been a greater love.

This year, very unfortunately, Good Friday and Earth Day are on the same day.  It was not intended that way and Christians need not think it was purposeful.  It is a terrible reminder however, that men worship themselves and creation rather than coming to the cross.  They bow to the religion of "Green" rather than the payment of "Red".  Oh, that men would come to Christ as Savior and Lord!  I have included the Wikipedia article exerpt below on "Earth Day" for your education.

May your mind be on the Cross today.  I am first including a wonderful Good Friday Song - The Power of the Cross  http://www.youtube.com/watch?v=KdYE0pkCu-Y&feature=related


Significance of April 22 - Senator Nelson chose the date in order to maximize participation on college campuses for what he conceived as an "environmental teach-in". He determined the week of April 19–25 was the best bet as it did not fall during exams or spring breaks.[51] Moreover, it did not conflict with religious holidays such as Easter or Passover, and was late enough in spring to have decent weather. More students were likely to be in class, and there would be less competition with other mid-week events—so he chose Wednesday, April 22. (wikipedia.com ; Earth Day selection)
Posted by Tobe Witmer at 8:39 AM