About every other year as part of the LBC Staff Christmas festivities, a battle of wit and guts rages in my basement.  This week for several hours, the Staff men waged war against each other in Monopoly in my basement to the death.

This year, the reigning champ, Pastor Pritt met his match with a new young buck known simply as "Cruice like Juice".  Please enjoy the play by play.

Witmer jumped out to an amazing first two rounds of the board buying up many choice properties on vairous colors.  This slowed and Olinda eventually caught up to the purchasing frienzy.  Cruice took the Untilities/Railroad strategy straight from an online cheat site, and scored the first "monopoly" with Utilities (though it is debated if Utilities can be actually counted for anything).  Pritt seemed to lack "umpah" at first, but slowly built up steam and negotiated with Witmer for the first true "monopoly" in light blue slumb lands.  This trade would determine the battle at the end of the game and was only given by Witmer to secure one railroad and an orange property to kill Cruice dead in his tracts that owned two railroads and an orange.  The promise was made to Pritt that Witmer would bury the properties and they would never be sold to Cruice.  A promise that was kept.

Olinda then made several decisions that seemed to allow him to surge to an imminent dominance.  Cruice licked his wounds on the Railroad debauchery for several rounds and only made a purchase of minor properties in addition to Park Place.  Somewhere along that time, Cruice landed on "Chance" as he seemed to along with "Community Chest" about 30 times in the game.  This is no exageration.  The card read "Advance to Boardwalk".  With one turn of the game, Cruice owned Boardwalk and Park Place.

Meanwhile, Pritt developed light blue and slowly acquired the direct purple corner.  Witmer was not silent acquiring several properties an "monopolizing" red.  Olinda acquired yellow.  Pritt developed first on light blue, then Cruice in the ritz, then Witmer on red.  Before long Hotels and multi-houses lined the board.

Somewhere in those moments, Olinda's world fell apart and I believe Cruice put him out of his misery with a direct land on the properties of the quadruple figure rents.  Olinda was out.  Witmer held much longer, but finally paid the price after several Pritt hits and a final Cruice destruction.

Then, there were two.  Pritt and Cruice exchanged rent and battled it out with no clear end in site.  Since Witmer/Olinda property was now available, several other properties were purchased to get advantage.  At the 5 hour mark, a time limit was set of 30 more minutes and the two battled it out like Tolkien warriors of old.  As the final minutes ticked away, Pritt landed one to many times on the ritzy side of town and lost most of his cash and several of his extensive web of hotels and houses.

Pritt was dethroned and there was a new Champion in town.  Hail to the new champion and be sure to go by his office to admire his new "traveling" trophy. 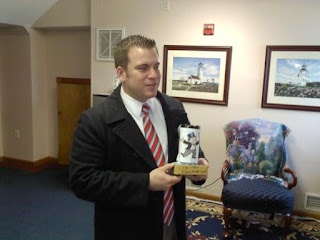 You may question the wisdom or legitimacy of such a game.  I will simply tell you with experience that all work and no play makes a church staff...well, no fun to work with.
Posted by Tobe Witmer at 7:53 PM